Many seniors are from a generation that, on the whole, still scorn drug abuse and stigmatize those people who engage in such activities. However, as the baby boomer numbers increase in senior living environments, they bring with them a more freewheeling attitude about drug use and misuse rooted in the culture of the 1960s and onward. Many of the senior baby boomers have experienced illegal drugs first hand, and because of a sense of nostalgia, their views may be more tolerant to the overuse or abuse of drugs. 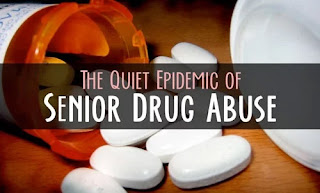 The opioid epidemic in America is now firmly rooted in the senior population. Statistics indicate that opioid addiction has been growing as fast or even faster among seniors compared to other age groups. The National Institute on Drug Abuse (NIDA) estimates 115 Americans die every day from overdosing on opioids and according to 2014 report by the government Agency for Healthcare Research and Quality, the rate of hospitalization for opioid overuse among those people 65 and older has increased over five-fold since 1993, and continues to worsen.

The crisis has grown mainly from doctors prescribing opioids like OxyContin much more frequently beginning in the mid-1990s under guidelines and assurances from pharmaceutical companies that opioid pain relievers were not as addictive as previously reported. However, this opioid class of drug is highly addictive, and many patients prescribed the medication end up abusing their prescriptions. Based on controversial research in 2009, the American Geriatric Society (AGS) announced that they were in favor of prescribing opioids, asking doctors to consider opioids for any senior with moderate or severe pain. Since seniors often have multiple chronic pain conditions, it is easy to see how addiction rates can skyrocket among the senior population. But, it is more than just opioids.

According to the Drug and Alcohol Dependence Journal, of the 63% of senior study participants who had an alcoholic drink over the course of one month, 13% had engaged in binge drinking, which is defined as having five or more drinks in a single session of imbibing. Bars and pubs are becoming one of the new normal amenities in life plan communities, and it can put seniors at significant risk. Stumbling and falling after having too much to drink or driving a small golf cart while impaired can have disastrous consequences. There is also a danger of mixing prescription medications with alcohol, which can be fatal.

Beyond opioids and alcohol, there is marijuana. As more and more states legalize medicinal (and recreational) marijuana and provide them in edible forms, more seniors are turning to pot as a painkiller and anti-nausea treatment. Contrary to what many believe it is not harmless, especially in a geriatric patient. The strains of marijuana available are potent and can create confusion, delirium, and even psychotic episodes in seniors and its interactions with legally prescribed medications are often hard to assess.

Professional staff in the aging services industry are trained to look for signs of drug misuse and abuse. The Center for Disease Control (CDC) is now recommending doctors to opt for short-term, fast-acting medications instead of long-lasting drugs and prescriptions.  But seniors who experience multiple, chronic pains may find this means they take more pills as their conditions are usually degenerative.

The best way to solve the problem is through education. As a senior, one should be aware of their medications and the proper doses to take. Encourage each doctor to prescribe the lowest necessary dose and look to alternative options to address pain. Never exceed the recommended dose as prescribed and follow the instructions given by the doctor.  Do not take prescription medication with alcohol. If a senior is having trouble understanding their medications or gets confused with the dosage, encourage them to talk to a trusted family member.

Consider drafting a health care power of attorney document that will allow someone the senior trusts to be their advocate for a safe and happy senior life.  Contact our office today at (402) 614-6400 and schedule an appointment to discuss how we can help you with your planning.