Bacteria May Be the Hidden Cause of Many Diseases

Health experts have been advising people for years about unhealthy habits being the cause of "lifestyle" diseases that are increasing across the US. These lifestyle diseases become more common with age and include heart disease, type 2 diabetes, some cancers, and Alzheimer's disease. Around the globe, these diseases account for 70 percent of all deaths. New Scientist magazine is reporting evidence suggesting bacteria are to blame for the diseases and that this finding will herald the coming of a revolution in medicine.

However, don’t stop healthy habits just yet; findings in disease after disease indicate that bacteria are covertly involved which complicates the problem. Bacteria will invade bodily organs and then co-opt the immune system in a sort of parasitic relationship as the bacteria boosts their survival while making the human body break down. In theory, if the bacteria microbes can be stopped, there is a potential to defeat disease conditions like heart attacks or Alzheimer's.

How can such an all-encompassing and seemingly simple underlying cause be overlooked for decades? Bacteria have eluded scientists because they work very slowly. Like a terrorist sleeper cell, the bacteria can hide or lay dormant for long periods inside of cells, and that makes them difficult to grow as a culture. DNA sequencing informs scientists and researchers that bacteria are in places they were never known or supposed to be and shaping the body’s inflammation responses.

The medical community is up-ended by this startling paradigm shift in disease causation. The information is so contrary to the current medical understanding that some scientists and researchers are only cautiously optimistic. Many scientists have spent years looking for answers to the root cause of diseases and are left frustrated by their inability to identify the reasons.

The worst offenders in the link between bacteria and disease are gum diseases.  So it is bacteria that cause gum disease that is responsible for the most widespread disease of aging. Maurizio Tonetti of the University of Hong Kong calls gum disease “the most prevalent disease of mankind." Gum disease is prevalent in 60 percent of Americans aged 65 or more. Germ theory finds the bacterial culprit known as Porphyromonas gingivalis  (P. gingivalis) is linked to the broadest array of disease conditions. 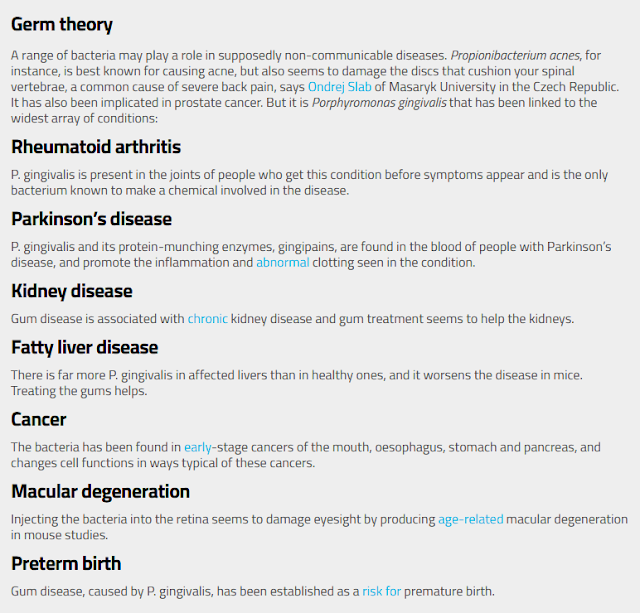 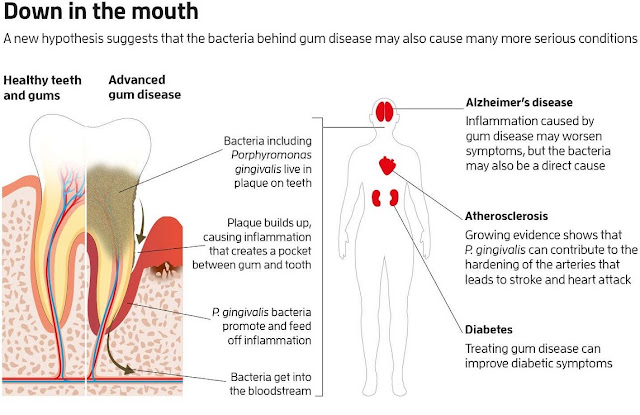 Gum disease is releasing bacterial P. gingivalis into your bloodstream and promoting inflammation long before an infected tooth falls out. Americans 30 and older have a 43 percent rate of some form of gum disease, and many find dental insurance an added expense they didn't think worth the price. What a price it turns out to be. Since bacteria cause diseases and bacteria are prevalent in the majority of Americans, what can be done to manage the role of these bacteria within the body's immune system?

Some companies are developing drugs that will block specific inflammatory signals or responses to slow disease progression. Even if the goal to prevent a limited number of signals or responses is successful, it is unclear what tampering with the human immune system can unleash. While being a relatively simple identification with the advent of DNA sequencing, bacteria still manages to host itself in the body's vastly complex immune system. This situation makes for a complicated fix.

Once P. gingivalis enters the bloodstream, it changes its surface protein. This change allows the bacteria to cloak itself inside the immune system's white blood cells. Even within the cells themselves, they enter into its lining arteries. Here it can remain dormant and primarily undetected until it wakes to invade a new cell. Because bacteria are so hidden, antibiotics will not identify it to kill it, and immune defenses do not respond to it. There is much to consider from research and experimental perspectives.

Understanding the underlying cause of many diseases is a breakthrough, but an application for preventing disease based on this information is still in the developing stages. While the future does look brighter, it is always a good idea to live an overall healthy lifestyle.

How We Can Help

Call (402) 614-6400 today to schedule your free consultation with one of our experienced attorneys to discuss long-term care options. Visit our website at www.ElderLawOmaha.com.

This article should not be construed as legal advice. Situations are different and it’s impossible to provide legal advice for every situation without knowing the individual facts.